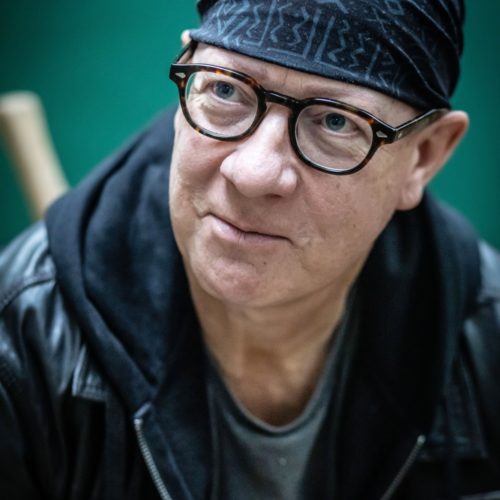 ‘Today Gerard Burns has three paintings hanging in the National Portrait Gallery in Edinburgh. Not bad for a boy from Cumbernauld whose tutors couldn’t see any future in his unfashionable brand of Scottish realism.’ (from Gerard M. Burns, published 2020)

We recently enjoyed a wonderful evening, full of colour and variety, in the company of Gerard Burns, portrait artist, sculptor and musician.

I was in the fortunate position to be posing the questions and Gerard kept us all captivated with stories of his life, and descriptions of his creative process and how he makes paintings. The virtual event went by in a flash, with those attending commenting that they wished it could have continued for longer. If you would like to view the recording, it can be found on Carbon’s YouTube channel here or by clicking the video below

First, Gerard outlined his tough working class upbringing where the obvious choice of career was anything but becoming an artist. That didn’t deter Gerard, who went on to Glasgow School of Art, and to his surprise, did so with dad Joe’s full support.

But Art School wasn’t all Gerard had hoped for, and we learned on the night that in spite of graduating with a good degree, he got so little from it that he would not go to Art School were he to have his time again.

Thoroughly disillusioned, Gerard went to work in the ‘Auld Hoose’ bar and pursued his musical dream instead. He was lead singer in the band ‘Valerie & the Week of Wonders’ who secured a record deal with A&M records. During the event, we were treated to a video of ‘Ships on the Clyde’ which took us right back to 1984! The production was surprisingly good quality especially given that it was made 36 years ago.

Gerard’s music career, however, didn’t provide a reliable income so he turned to teaching where he rediscovered his love of painting. While working at St Aloysius, he began producing work of a very high standard and in 1997 won The MacFarlane Prize at the Royal Glasgow Institute of Fine Arts with his work ‘The Forge of Vulcan’.

This gave Gerard the confidence to approach galleries in Glasgow to show his work. But all he found was rejection and humiliation. He was told that nobody in the country would want to show his work.

With hindsight, this did Gerard no harm whatsoever. He decided to exhibit work from home. He now runs his family business from Fairhill where he has a studio, gallery and framing workshop. From here his art is created and sent all over the world.

Gerard has painted many famous faces including Ewan McGregor, Billy Connolly, Nicola Sturgeon, Elaine C. Smith, Laura Fraser and Brian Cox. We learned on the evening that the person Gerard would have most liked to paint was the late Sir Sean Connery.

The evening concluded with Gerard describing his experience of painting Doddie Weir. It was a fascinating and emotional insight into not only the process but also the psychological dimension to making a portrait. We then watched a video taking us from Gerard meeting Doddie and his wife Kathy at their farm in the Borders, to the sale at a fundraising dinner in Hong Kong in the presence of Billy Connolly. The painting now hangs in the National Portrait Gallery in Edinburgh – a stunning image and a fitting tribute to a true giant of a man.

All of this can be viewed here.

If you have the time, we hope you will enjoy watching the recording of the event, a video or two, or simply looking at a few of Gerard’s paintings.

Gerard’s beautifully illustrated book, Gerard M. Burns, is available until Christmas with a discount of 10% if you use the code CARBON10 when making your purchase via the Gerard M. Burns website.

I wish you a very Merry Christmas and the very best wishes for 2021.

If you would like to register for future events please get in touch with us at enquiries@carbonfinancial.co.uk or sign up for our newsletter here.