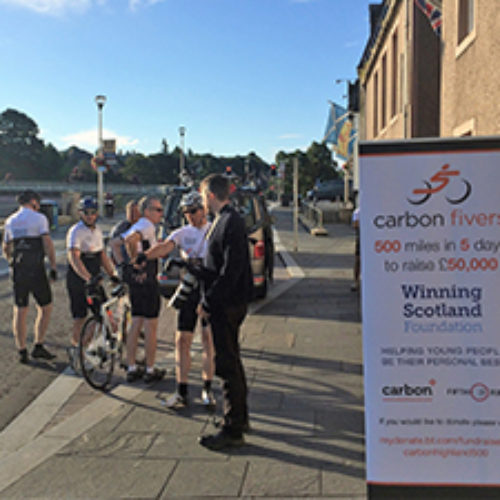 They did it: 500 miles in 5 days to raise £25K for Winning Scotland Foundation.

In the first of his series of blogs about taking on the Carbon Fivers 500 Highland Challenge, lead cyclist Richard Wadsworth, his feet now firmly back under his desk, reflects on the ups and downs of the journey.

We set off from Inverness in the sunshine, in short sleeves and with no wind. Flat roads sped us to Garve where we had our first stop and test of our VW support van, its picnic table and seats. Here we also met up with the London Three, swelling our cycling number to 11.

After the break we sped on, down to Lochcarron, in and out of the sun, and alongside the single-track railway. Our lunch for 13 at the golf club nearly caused divorce for the husband and wife team behind the counter, but the food was good, which was just as well as straight after the climbs began.

Back on the road we were out of Lochcarron and on to the first climb of the day, a cheeky one-mile series of slopes, the first rising steeply from sea level. The views were great from the top and then the fast descent took us all the way down to the base of the monster, the Bealach Na Ba, a near-six mile climb rising to over 2,000 feet.

Photos taken, we set off up the hill, in and out of the wind as we made our way up the lower, gentler slopes. Then it got steeper, then steeper, and then the headwind kicked in, just before the gradient hit 20%. In and out of the saddle we battled on, close to being slow enough to topple over, before we finally made it to the switchbacks, which brought huge relief.

At the top, however, the storm was in full flow, rain adding to the strong winds and, despite sheltering behind cars and vans, we were quickly very cold. The cold made the descent even more treacherous, with stiff fingers grabbing brakes to slow the pace and to help protect us from the crosswinds. Eventually we reached the Applecross Inn where we were warmed by very welcome hot coffees.

Later, showered and changed, we enjoyed excellent food, and were off early to bed, already thinking about what the next day had in store…