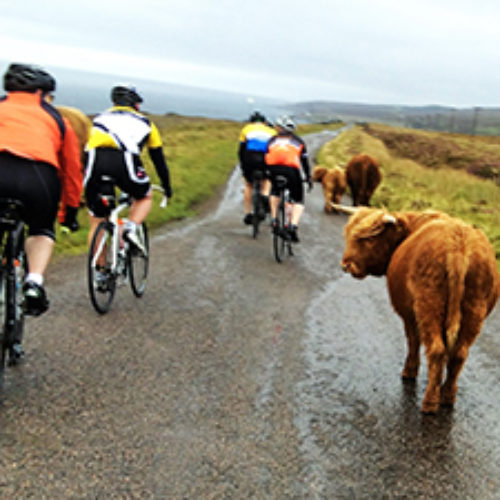 In the second of his series of blogs about taking on the Carbon Fivers 500 Highland Challenge, lead cyclist Richard Wadsworth recalls mechanical mishaps, beautiful beaches and an exhilarating descent.

We met at 7.15 in the morning, knowing today was the longest day at nearly 120 miles, including many, many climbs. Our start was delayed, however, as various mechanical issues arose and were dealt with. Eventually we were off, round the bay and climbing up to the beautiful coast road.

Up on the coast road we braced ourselves for the constant up and down, but something felt different, the going was a bit easier – we had the joy of a tailwind. Soon the views off the coast to Skye were behind us and we turned inland, negotiating highland cows, to coffee at Shieldaig.

Fast roads, an almost tour-team formation and tail wind sped us to our lunch at 50 miles at Garloch. Mechanicals continued to dog us, but the pace on the bike was high, and after lunch the scenery got even more fantastic with beautiful beaches and far-off hills.

After a late afternoon break, we embarked on an 8.5 mile climb out of Dundonnell. The climb was well worth it as we blasted down a huge descent in the early-evening sun to Ullapool, and a great dinner, a well-earned reward after a great day.