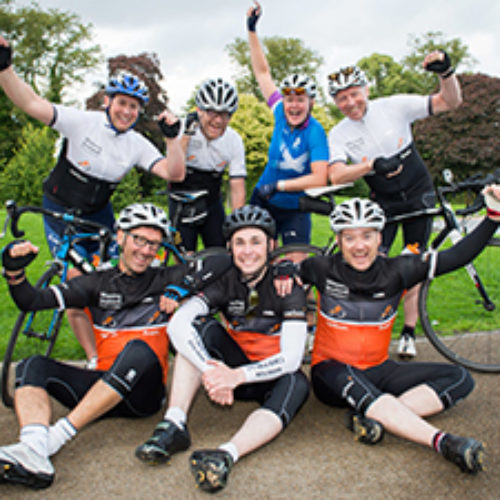 In his final blog about taking on the Carbon Fivers 500 Highland Challenge, lead cyclist Richard Wadsworth and the team wave goodbye to Britain’s remotest hotel and head for the finishing line.

We waved goodbye to Graham and Maureen, and set off down the rutted, grassy drive to the main road and headed west, now joined by Fiona Duncan, London 2012 Paralympic Tandem Pilot, World Championship Silver Medallist and Glasgow 2014 Team Scotland athlete who is now a Winning Scotland Foundation Ambassador.

After a couple of punctures, we ground up a long hill to a break near Crask. Refuelled, it was back into the winds, eventually across Bonar Bridge and on to Ardgay for lunch, where we met a couple of guys nearing the end of their Land’s End to John O’Groats ride – we were now on the main route used for ‘LEJOG’.

After lunch we enjoyed a great climb up the Struie giving us fantastic views to the East and the coast. We sped down and eventually reached Dingwall where we somehow ended up having our break at the back of a Lidl car park. We were all quite happy, however, knowing that we had only around 25 miles of our adventure to go.

A wrong turning nearly took us onto the A9, but we managed to find the right way and sped all the way into Inverness in a long, fast line. Finally we stopped at Eden Court Theatre in Inverness for photos and self-congratulations. 500 miles, or thereabouts, done, in five days.