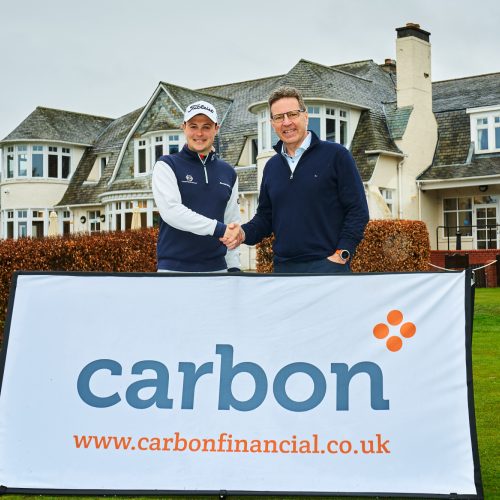 The two-day event was the curtain-raiser on the 2022 Farmfoods Tartan Pro Tour pieced together by former Open champion and Ryder Cup star Paul Lawrie.

It was played over the Lansdowne Championship Course and McDonald (Kilmarnock Barassie Links) kept his nerve to win a three-way play-off with Glenbervie’s Fraser Moore and Rhys Thompson of Close House.

The trio had led the field with a six under par 138 total, triggering the extra hole decider.

McDonald (29) claimed his maiden Tour victory and a £4000 cheque with a spectacular eagle on the 443-yard par 5 1st hole, brilliantly holing a greenside bunker shot.

Carbon managing director Gordon Wilson was on hand to congratulate McDonald at the prize giving.

Paul Lawrie welcomed the support of Carbon Financial for the opening tournament on the Tour, which now makes for Montrose and Royal Dornoch.

“Gordon Wilson and the Carbon team came on board last season and it is fantastic that they are again supporting Scottish golf,” he said.

Delighted champion McDonald noted, “I was in similar positions last season and I learned from that. I was determined not to get carried away.

“The rain came on in the back nine so that made it more challenging. You wouldn’t choose to go out and play in conditions like that!

“I birdied 17 and then it was all down to the extra hole. I hit a nice drive down and a three wood caught the lip of the bunker.

“It was maybe a 15-yard bunker shot. It was sitting nicely and it came out perfectly. It was a great feeling, an amazing start to the season.

“I have been close a few times and was in contention here last year.

“The Tartan Pro Tour is fantastic and Paul Lawrie deserves so much credit for putting it together. The fields are very strong. It is going from strength to strength.”

While McDonald was preparing for the Blairgowrie Perthshire Masters, fellow Scot and friend Bob MacIntyre – a member at Blairgowrie as well as Oban’s Glencruitten - had been making the cut at Augusta.

“I grew up through the Scotland squads with Bob, Ewen Ferguson, Grant Forrest, David Law and others who have made an impact on the European Tour,” he said.

“But I try not to compare myself with them, especially with the heights they are reaching.

“It’s great for Scottish golf. We are all friends who have grown up together. Bob did so well at The Masters and it’s wonderful to see.

“As for myself, I wouldn’t be doing this if I didn’t have ambitions to do well in professional golf. This win will give me a great boost going forward.”

McDonald (29) echoed comments from fellow competitors in praising the work done by the Blairgowrie greenkeeping team.

“It’s very early in the season but Lansdowne was in fantastic condition,” he said. “They deserve a massive pat on the back. It held up in really poor conditions.

“And it’s great to win on what is a proper golf course.”