Gordon gets on his bike for Doddie's charity 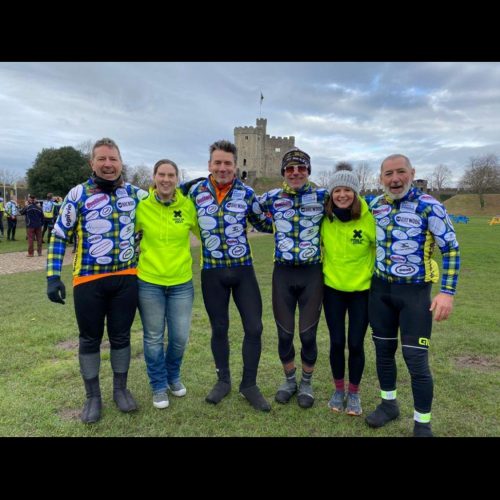 Carbon MD, Gordon Wilson was thrilled to see the rugby world come together to support Doddie Weir’s campaign to find a cure for motor neurone disease.

Gordon was among a 100-strong group making for the Principality Stadium for the Wales v Scotland Six Nations clash.

Their combined efforts have generated more than £300,000 for the “My Name’5 Doddie” charity.

The group was led out of BT Murrayfield on the 500-mile, 50-hour challenge by Mark Beaumont, the round-the-world record breaker, and former Scotland international skipper and British Lion Rob Wainwright.

“We worked really well as a team and we have already raised more than £7,000 thanks to our very generous donors,” said Gordon.

“Sean is a top endurance adventurer and triathlete; his record is extraordinary. He has also trained Dougie for demanding events in the past.

“He and fellow team member Alan McKechnie are good friends and were super organised. So thankfully I was in good hands.

“The organisation of the event was incredible.

“We were rolling up at rugby clubs along the way and supporters were there at all hours to ensure we had food, drink and hot showers.

“As a rider, it seemed to go like clockwork, although in deepest darkest Wales we did hear tales of some cyclists being pelted with eggs.

“But overall, the welcome we got along the way was extraordinary and it is amazing to think the challenge has raised more than £300,000.

“The generosity of people was summed up by Neil Parry, director of operations at the Voco Hotel at St David’s, where I was staying.

“When he realised I was riding for Doddie’s charity he was determined to waive the accommodation costs and have them donated to the cause.

“I found the whole experience inspirational in a lot of ways and find myself thinking what I’ll do next.

“I certainly have the utmost respect for the seven guys who completed the whole 500 miles individually, including a few pro cyclists like Mark.

“I was cycling with one lad for a while who is away with Mark to Race Across America later in the year. I am definitely not in that category!

“But I managed to get through it and coming into Cardiff before the match was incredible.

“We had all gathered at the Newport Velodrome and rode the last 16 miles to the Principality Stadium together, along with the match ball, of course.

“The reception we got from fans of both teams was amazing. Everyone seemed to know all about the cause.”

While Rob Wainwright took a tumble off his bike and had to dust himself down, Gordon admitted his biggest issue was plotting his way through Liverpool.

“Getting out of Liverpool on my own at 5am could have gone more smoothly.

“That turned into something of a nightmare, with the sat nav letting me down and trying to take me onto motorways slicing through the city.

“Like any big city, there were roads going everywhere and probably areas you wouldn’t want to find yourself in with a bike in the middle of the night.

“We had been warned there would be a few anomalies and you might be taken down a dead-end or two along the way.

“Eventually I got to a footbridge which took me over the motorway and I got back on track. That was quite a relief.

“So the most challenging part for me turned out to be night time navigation rather than the cycling.

“We got quite lucky with the weather en-route because it had been hideous, driving sleet coming out of Edinburgh.

“It was just February cold and windy but no real rain after the first leg.

“And the reception we all got in Cardiff was anything but cold.”