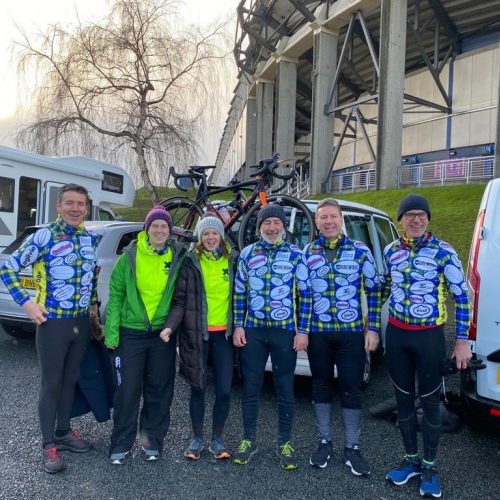 The Carbon Financial Partners managing director is part of a charity cycle team tackling a gruelling 500-mile challenge in the space of 48 hours to support Doddie’s Weir’s MND charity, My Name’5 Doddie Foundation.

There’s a strong Perthshire connection to the challenge, with round-the-world record holder Mark Beaumont and former Scotland rugby captain and British Lion Rob Wainwright among the intrepid band in a race against time to deliver the match ball to the Principality Stadium in Cardiff.

Before leaving the BT Murrayfield Stadium yesterday, Gordon took time to speak to the Perthshire Advertiser.

“I’ve been training hard for the challenge since the turn of the year, with regular circuits around the Perthshire countryside,” he said.

“But the 100-strong peloton includes some serious athletes and endurance cyclists like Mark. To him, this is just a little jaunt I suspect!

“We have to average speeds of 15mph to deliver the match ball on time.

“Luckily I will be involved in a relay team over the next two days on the road and it’s for a fantastic cause.

“I set a personal target of £1000 and I've already smashed that. People have been very generous.”

Perth-born Rob, who was educated at Glenalmond, said: "We have to believe that a breakthrough in MND treatment is just round the corner, and push ourselves and others to raise funds to realise that dream.

“We do it for extraordinary people like Doddie and Davy Zyw, but ultimately for all the other friends we have not met who suffer or will suffer from this awful disease.

“Our quest is to put MND in the bin that contains Smallpox and the growing list of other ex-diseases.”

Extreme adventurer Mark, who grew up in the Blairgowrie area, added: “The Doddie Cup 500 ride is the gloriously hard finale to the Doddie Aid campaign.

“Having been on the inaugural pedal to Twickenham, I remember both extremes, the wicked weather, and the wonderful camaraderie!

“Our ride to Wales is shaping up to be equally memorable - thank you to everyone who has shown their support.”

This year’s ride is split into legs with short breaks at rugby clubs throughout Scotland, England, and Wales.

To support Gordon Wilson see his JustGiving page or the Doddie Cup 500 at myname5doddie.co.uk for further information.