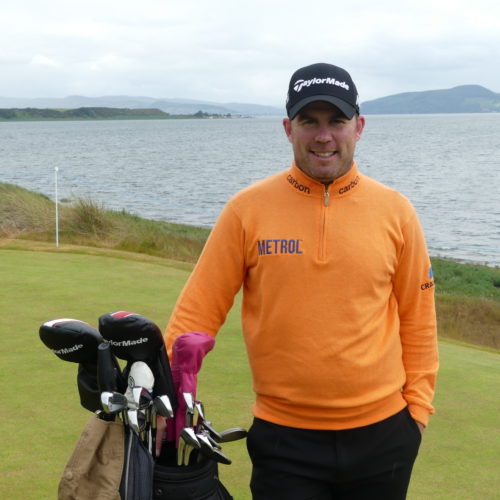 Carbon European Tour ambassador Richie Ramsay is looking forward to playing on home territory at the Aberdeen Asset Management Scottish Open at Caste Stuart from July 7-10 – and sporting the company’s corporate orange and black colours on the Friday at the Inverness course. You can read the European Tour blog and watch Richie’s hole-in-one here.

Richie captured the headlines in Germany and we caught up with him to reflect on a memorable hole-in-one.

“I’ve had five holes-in-one but my latest was something special.

You may have seen footage of the 160-yard tee-shot at the 16th hole during the first round of the BMW International Open in Germany.

I was amazed at the media coverage it got.

Sure, it was a sweetly struck 7 iron shot and it was all over the flag from the moment it left the club face.

But the media coverage had more to do with the fact that it won me a stunning BMW M760Li xDrive which I have been told is worth in the region of £130,000.

I have to admit I was thinking of the car on show behind the tee box even before the ball pitched on the green and dropped into the hole. Sometimes you just get a feeling about a shot but I didn’t dare say anything because I didn’t want to jinx it.

Instinctively I turned around and jumped up onto the podium to try and get into the vehicle. But the door was locked and I had to wait until the round was finished to come back and take a closer look.

The ace at the Gut Laerchenhof Golf Club in Pulheim followed on from one at last year’s KLM Open. I won a year’s supply of beer to celebrate that shot but the BMW is rather special.

Everyone has been asking about the car and I’m not sure what I will do with it yet.

It’s not even out on the market so it’s pretty cool to be one of the first people to get their hands on one.

Having had a closer look, it’s got all the toys and gadgets you could wish for.

We watched some football on the screens in the back seat while leaving the course the other day and a flick of the switch provided me with a massage while I was at it!

On the golfing front I have to say my game is very solid.

Having said that, my short irons have room for improvement. Do that and I know my scores will plummet.

That’s what’s required to ensure I’m in the mix on a Sunday afternoon.

I’ve gone back to my old irons and feel a lot more comfortable with them. They’re giving consistency into the greens, which I felt was lacking. Mentally it is just about belief and free flowing a little bit more.

The target this summer is the same as ever – to try and be the best I can be.

I believe small improvements in the pivotal areas of the short game and mental side are keys to success.

Away from the golf course baby Olivia is the centre of attention and she is growing so quickly.