What investors want and need are often two different things 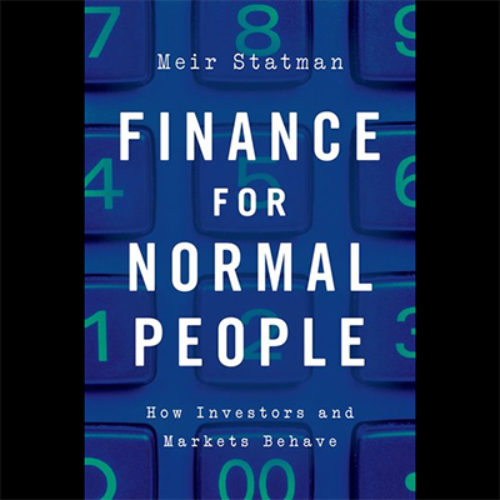 Meir Statman is one of the world’s best-known experts on behavioural finance. A Professor of Finance at Santa Clara University, he attempts to understand how investors make financial decisions and how those decisions are reflected in the markets. He’s recently written a book called Finance for Normal People: How Investors and Markets Behave. In this interview he talks about the book, the lessons to learn from it and how, in his view, low-cost indexing is the best way to invest.

Tell us about your new book and what it basically says

My point is that we have dwelled too long on standard finance, on the one hand, where people are rational, like computers, and the first generation of behavioural finance, as I call it, on the other, where people are bumbling and irrational. We’ve overdosed on cognitive errors and how people get things wrong. And what we forget are the people who are like me and you — that is, normal people who have normal wants that are very simple. We want to be rich. We don’t want to be poor. We want to take care of our kids. We want to acquire high status. Some of us want to be true to our values. Some want to play games in the market. And once you look at what people want, you can distinguish what is a want from what is an error. And then you can help people to better satisfy their wants without falling into the pitfalls of errors.

So what are the lessons that investors can learn from your book?

Figure out what it is that you want. Say, for example, that status is important to you. Is buying alternative investments like hedge funds your way of getting status? Hedge funds are lovely because they are available only to the rich, and so you can just say, I’m into hedge funds, and we know that you’re rich without you having to brag about it. But the returns of hedge funds — to investors, not to their managers — are lousy. And so, ask yourself, “Is it worth it for me to pay these kinds of fees for feeling that I’m a member of a special club?” Alternatively, you can fly First Class. You can donate money to charity. There are many ways to increase your status. Figure out what is a good way, an economical way, for you to do that.

You yourself are an advocate of low-cost indexing. Why is that right for you?

Well, it is right not just for me personally; it is right for most people. One thing that people don’t understand is that the stock market is a different kind of game than, say, being a surgeon. If you are a surgeon and if you conduct a particular kind of surgery every day then you get really skilled at it. But the stock market is like playing tennis against, possibly, Djokovic on the other side. It’s not like playing tennis against a training wall. And so you always have to ask yourself, “What is the advantage that I have over Djokovic? Do I have an extra-sized racket? What do I have?” And for most people, the answer is nothing. And so, why play that game when you can just sit yourself on the sideline and get the average return? Remember, for everyone who gets above-average returns there is going to be someone with below-average returns. So, mediocre is beautiful relative to getting below-average returns.

As you say, we invest for different reasons, and one of those reasons, for some people, is the need for fun and excitement

Exactly. One of the things that people want is to play games. Now some people play video games. But if you ask them, “Are you going to make money out of playing video games?”, they’re going to say, “No, it’s just a very entertaining use of my free time”, and that is fine. But when it comes to investing, nobody seems to want to say, “I played the market because it is fun, and I know that I’m going to lose money on average, but it’s still worth it for me in the same way that playing golf is worth it to someone else”. That is the problem. We are not honest with ourselves and with others about the nature of this industry and the nature of people’s wants. If you lose £2,000 each year relative to an index fund, and that is a fair price for you, go ahead. But don’t fool yourself, don’t do any funny accounting.

So why do you think so many people continue to use active funds despite all the evidence that they shouldn’t?

The main reason is that they don’t really understand the nature of the game. That is, they really think that if they study a company then they will have a leg up in the same way that the student who studies for the exam is likely to get a better grade. But they don’t understand that this is a zero-sum game where, as I like to say, in every trade there is an idiot. And if you don’t know who the idiot is, you are in trouble.

So people don’t frame it right. They think that if they get better at knowing the market, they’re going to be able to beat the market, but they don’t understand that there is a fellow on the other side for every stock that they’re selling, and this fellow might have inside information.

For other people, they do understand the nature of the game, but they’re really overconfident in their ability.

But things are changing, aren’t they? All around the world, people are realising that active investing doesn’t work

Yes, people are moving away from it. There is a distinct move towards index funds. But I don’t think that we are going to get to a situation where people have 10% active and 90% passive, because fools are born every day, and because, for many people, it’s a game — it’s their equivalent of a lottery ticket. They have a regular job and so they cannot start a new Google. So what will they do? They’ll buy lottery tickets or they will buy stocks and hope that they strike lucky.