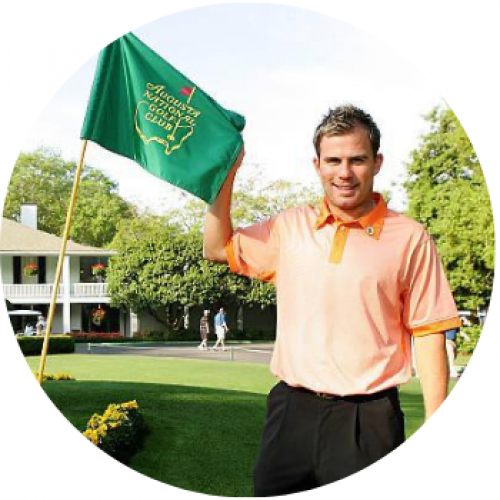 Golfers around the globe would normally be counting down to the first Major of the season, But, like all the sporting flagship events, The Masters has gone on hold while the world gets to grips with the threat posed by Covid-19.

Like so many of us, Carbon’s European Tour ambassador Richie Ramsay finds his working life on hold.

So we invited Richie to reflect on his own Augusta memories, when his US Amateur title triumph at Hazeltine National - the first by a Scot since 1898 - secured a passport to the 2007 tournament, when Zach Johnson was fitted with the famous Green Jacket in the Butler Cabin ceremony.

“When I won the US Amateur, I was looking forward to The Masters almost straight away. You know what is on the line, along with invitations to the US Open and The Open.

“I had been to Open qualifying already and had come close. There is always a door there. But with Augusta it is down to wins on the USPGA Tour and being in the world’s top 50.

“Like any golfer, you have your perception of Augusta National from watching it on television. Myself and my coach Ian Rae were there for a week in January, spending every day out on the golf course, even though we knew it would be a very different proposition come April.

“We got to have lunch in the Grill Room, take a look round the clubhouse and see the clubs on the wall that past champions have left. We worked out where everything was going to be when we arrived for the event. It is a big, big place and in Masters week we didn’t want to arrive and have our jaws hitting the floor.

“I stayed in the Crow’s Nest high above the clubhouse a couple of nights in the build-up. It’s pretty cramped up there. It’s one big room partitioned off for five. But then you walk down the steep staircase and you’re in a different world, overlooking the first tee.

“The gates don’t open until 8am so you can sit on the balcony for breakfast and you have the place to yourself. I was trying to find the right balance between soaking it all in and remembering I was there to play golf.

“Everything is immaculate and people are very welcoming. It’s how you imagine your perfect golf tournament to be like. It was really cool driving up Magnolia Lane. Then you are in the Champions’ locker room and the best of the best are in there…Jack Nicklaus, Nick Faldo, Phil Mickelson. It’s the first Major of the year and it’s heads down and getting on with business.

“Among my souvenirs from that year at Augusta I have a 10 dollar note I took off Mickelson for winning a bet over nine practice holes on the Sunday. It’s tucked away with scorecards signed by Mickelson, Jose Marie Olazabal and Seve. I also have my Augusta strokesaver, a couple of ball markers and the silver money clip gift.

“The golf course is genius in terms of design. You know your chance for glory is there. But equally disaster can so easily strike. It tests you mentally as well as physically. The very best tend to win at Augusta and it’s no coincidence. They can handle the sensory overload and experience generally tells.

“I had a pretty clear idea of the back nine, including Amen Corner, because that’s what you always saw on tv. Everyone talks about the changes in elevation and I certainly appreciate the design element more now. But back then I was struck by just how deep the bunkers were. Then there is the Augusta roar, with the noise rolling over the hills and hollows, especially 13, 14, 15 and 16.

“And there are so many raised-up greens which require high, soft shots. It is very forgiving off the tee but when you get to the green that is a different matter altogether. I missed the cut but looking back I felt I did myself justice tee to green.

“I was hanging in there for about 27 holes but I threw away all my shots on the greens. I couldn’t convert anything. I had been bouncing back and forward between the US and Scotland, playing links golf in the cold and wet. I’d never played on greens as quick as Augusta. I have seen greens just as fast since. But not with the combination of slope and speed. It is just ridiculous and there’s a magnetic pull from the 12th green. On many downhill putts you just have to touch it and let gravity take over. But uphill and into the grain is an entirely different challenge.

“It’s such a shame The Masters has had to go on hold along with all the other golf. Hopefully, whether you are a professional or a club golfer, we can all get back out on the course sooner rather than later.”

Read Richie's other blogs: "On relying on those you can trust", "The 2021 European Tour: 42 tournaments in 24 countries", "European Tour ambassador Richie Ramsay reflects on a year in Lockdown".