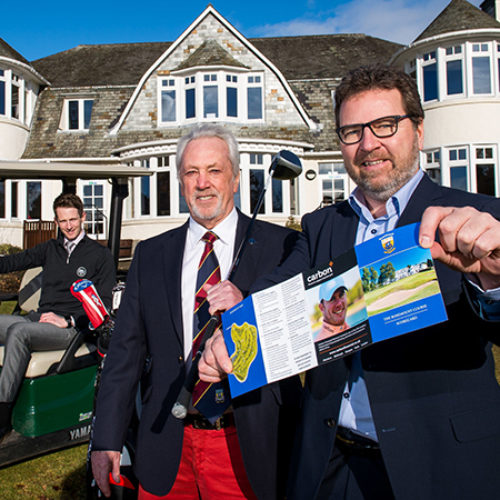 Carbon enjoys a hard-earned reputation for our commitment to Scottish sport.

It has been further enhanced by an agreement to become a ground-breaking “Premier Partner” with Blairgowrie Golf Club, host to the 2014 Junior Ryder Cup.

Carbon already enjoys a close relationship with top Scots professional Richie Ramsay, who acts as our ambassador on the European Tour, and backs the Paul Lawrie Foundation, which is promoting youth development.

In rugby, the Carbon name adorns the strips of Scottish U18 Schools Cup winners Strathallan and we are proud supporters of the Bill McLaren Foundation.

Welcoming the tie-up with Carbon, Blairgowrie Golf Club captain Brian Wesencraft said: “This is a first for the club, bringing together two respected, award-winning brands.

“We will be working closely with Carbon and they will be supportive of our various junior golf initiatives.

“Former club champion Bradley Neil has graduated to the European Tour this season and we have a number of promising youngsters eager to follow in his footsteps.

Golfers enjoying rounds at Blairgowrie – which has been hailed by legendary commentator and former Ryder Cup player Peter Alliss as his favourite inland golfing venue – will enjoy new-look scorecards bearing the Carbon logo.

Alliss was a co-designer of the Lansdowne championship course and enjoys honorary membership of the Perthshire club. The Rosemount course, which dates back to 1889, and the nine hole “Wee Course” bear the stamp of renowned architects James Braid and Dr Alistair Mackenzie of Augusta fame.

Carbon managing director Gordon Wilson, a long-time Blairgowrie member, said: “We have enjoyed links with Blairgowrie Golf Club through our support for the Bill McLaren Foundation Golf Day in recent years. That continues for this year’s event on 22 May.

“Many of our clients are members at Blairgowrie and we are looking forward to enjoying a closer relationship going forward.

“The profile of the golf club has never been higher, in the wake of successfully hosting the 2014 Junior Ryder Cup, and this summer Blairgowrie welcomes the inaugural Barrie Douglas Scottish Junior Masters and the Scottish Men’s Amateur Championship.”